In 1997, Heritage Community Association (HCA) initiated a plan for a scenic “Art Park” on a vacant lot due to an 1989 fire at the corner of 11th Avenue and Halifax Street. The park was conceived as an  alternative green space, a sort of “inner city oasis”. The Association worked hard to bring the vacant lot from a neglected space to a point of pride in the community. 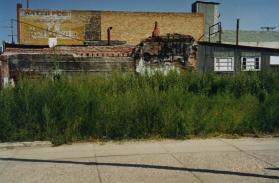 The original site design was facilitated by a landscape architect who provided expertise during the construction phase. The plan was developed in partnership with eight local  artists whose pieces of art found a suitable home in the Art Park. 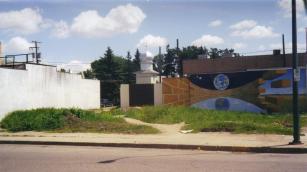 The majority of the work was done by a group of dedicated volunteers who put in countless hours to plan, organize and construct the project. The development of the Heritage Art Park saw many people from our community, ranging in age from children to seniors, put their effort into making the project a reality. 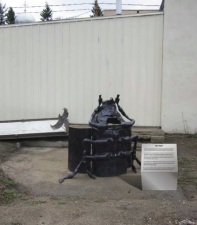 Shrubs, grasses, 14 Schubert cherry trees and over 1000 perennials were planted in the Park. In addition, four concrete benches embellished with colourful, handmade ceramic tiles frame the park’s perimeter, and two metal and stone sculptures, a metal insect shaped garbage can, a wood and metal bench, and ceramic and concrete benches complete the art projects within the park. A mural was painted on a wall of an existing building on the east side of the park, and a second mural was added on the north side of the park during a 2003 United Way Day of Caring project.

Unfortunately, over the years since the Art Park’s beginnings, the space gradually fell into disrepair. 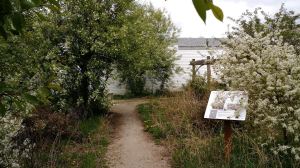 Renovations to neighbouring businesses resulted in the eventual removal of the murals, and the concrete benches gradually sank unevenly into Regina’s famous gumbo soil. With the founding volunteers having moved on, the original vision was all but forgotten, and plants became overgrown or crowded out by invasive species. 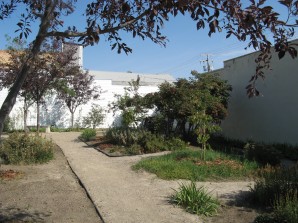 Despite its increasingly disheveled appearance, the Art Park retained a unique charm, and over the past couple of years, new volunteers began to come forward from within the community. Gradually, a renewed vision for the Art Park emerged, and in the spring of 2009, HCA was awarded a Wal-Mart Evergreen Green Grant towards improvements to the Art Park. These included the planting of edible native species including chokecherry, cranberry, Saskatoon, pin cherry, raspberry and gooseberry.

Shortly thereafter, the Art Park was selected for a 2009 United Way Day of Caring project. Over the

course of the summer, energetic groups of volunteers visited the Art Park several times, transforming it from an overgrown forest to a welcoming, breathable park! They weeded, planted, mulched, laid edging along the paths, and even began the ambitious project of leveling the concrete benches.

Several events have taken place in the Art Park since then. In 2011, residents brought their drums and joined together for a “Drum Jam”. Robert Currie, the Poet Laureate of Saskatchewan, read an except of his work in the Art Park in 2010. Since its inception it’s been a valuable area of the Heritage and is enjoyed daily by many.

Today we celebrate the recent momentum behind the Art Park, and look forward to making it one of the most vibrant cultural and green spaces in Regina! If you have an event or idea for the Art Park, please do not hesitate to contact us.

Join us at HCA in supporting Sum Theatre and Common Weal Community Arts’
Interested in building a career in tech but don’t know where to start?
Did you know the the newly reopened Maple Leaf Pool offers free programming all summer long? ☀️⛱
Did you know the Heritage Neighbourhood has a community fridge?
HCA would like to give a huge thank you and shoutout to Mrs. Alexander and Mrs. Keewatin’s kindergarten students, and Mrs. Sutherland’s grade 5/6 students from @thomsoncommunityschool for creating this amazing artwork!
You’re invited to our Virtual 2021 AGM!