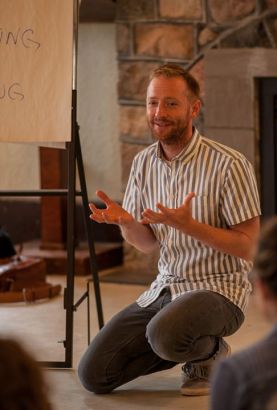 Jayden Pfeifer is a Regina-based actor, improviser, and teacher. He has appeared in  numerous performances on the Globe Theatre Main Stage, as well as several independent theatre productions. He is the Saskatchewan Regional Director of the Canadian Improv Games, a former Artistic Director of the CIG Improv Camp, and teaches improvisation sessionally with the University of Regina Theatre Department. Jayden’s company, General Fools, was the first of its kind in Regina and has been creating improvised performance across Canada since 1997. They have been a featured company at dozens of international improv festivals, where Jayden often serves as an instructor and guest director. In 2009, Jayden and co-creator Ryan Beil premiered their improvisation project Skin & Lungs, which they continue to tour to improv festivals around North America. Jayden has studied with a series of notable North American Improv instructors, and his work as an improviser has earned him four Canadian Comedy Award nominations.

Jayden is the host and creator of a monthly movie-commentary show, TALKIES, at the RPL Film Theatre. As the host and creator of Red Hot Riot with Jayden Pfeifer, a monthly comedy variety show now in its third season, Jayden has solidified his role as a respected contributor to the Saskatchewan arts community—an individual pointed towards the health and vitality of Regina’s indie theatre, music, and comedy scne. In 2013,he was named one of CBC Saskatchewan’s Future 40, a “group of 40 leaders, builders, or change-makers under the age of forty who are making a significant difference in their field to help shape the future of the province.” 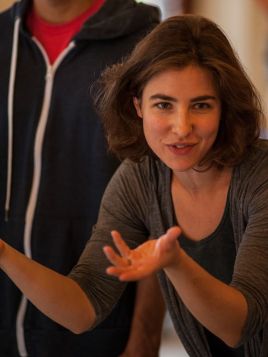 Johanna Bundon is a performer and choreographer based in Regina. Johanna works in contemporary dance and theatre. Recently, her choreography has been nurtured and toured Western Canada through the 2013/2014 Prairie Dance Circuit. Johanna often creates work alongside Bee Pallomina (Toronto). Their collaborative dance projects, which started in 2010, use improvisational strategies in both process and performance.
Bundon is a 2005 graduate of LADMMI: L’École de Danse in Montreal. She is also a 2008 graduate and now faculty member of Regina Globe Theatre Actor Conservatory. Her teaching practice embraces contemporary dance technique, ensemble building, and game creation. She has experience teaching with the Canadian Improv Games, as a sessional instructor within the U of R Theatre Department, through New Dance Horizons (Dance Core and Summer Somatic School) and as a guest instructor with Youth Ballet and Contemporary Dance, and Fadadance.

Presently, Johanna’s choreographic pursuit is: The Blanket Folding Project, a dance installation piece that explores the notion of shelter through the simple architecture of a moving blanket. This new work will be premiered throughout Regina Winter 2015. She is also excited to be on the inaugural board for the Queen City Hub, Regina’s community co-working space.
www.johannabundon.com

Though their training is in different disciplines— theatre and contemporary dance respectively—they share common artistic values, placing great precedence on collaboration, improvisation, and game creation. These methods are employed to create vibrant and inclusive atmospheres where spontaneity and expression can thrive. They strive to guide individuals towards their capacity to listen deeply and support one another steadily.

𝙒𝙝𝙖𝙩 𝙖𝙧𝙚 𝙩𝙝𝙚 𝙨𝙞𝙜𝙣𝙨 𝙤𝙛 𝙞𝙘𝙚 𝙙𝙖𝙢𝙢𝙞𝙣𝙜? There are a few signs, but the most apparent (and prettiest) is icicles on your eaves. It’s a sign that snow is melting and the water isn’t draining away properly. Time to get the snow off your roof! Find the other signs and some solutions at https://lnkd.in/dzqv3VJ
The Computer Resource Centre provides free public access to computers and other electronic technologies that can assist in job search and career exploration. Along with the technology they have a knowledgeable and resourceful staff, job board and resources to help develop and enhance your self-marketing tools.
Remember to Bring Your Own Bag!
Snoga in Wascana
Spread the word! With temperatures dropping again this week, and snow in the forecast here is a list of some of the locations throughout Regina that offer spaces and services to warm up over the winter season and in extreme cold temperatures.
HCA would like to say thank you to Angels 4 Warmth and Saskatchewan Union of Nurses (SUN) for their generous donation of winter supplies to support our Warm Up Heritage initiative!